Model Delivery is Risky Business, According to Money Managers Survey

Most investment managers believe that the risks associated with communicating model changes to sponsors are significant and have the potential to result in negative impact to their firms. This was one of the results of a survey done by Dover Research as reported by Jean Sullivan at the Financial Research Association’s 9th Annual Managed Account Summit, which took place in Boston last month.

47% of managers surveyed say that they support fewer than 5 platforms, 37% support between 5- and 10 platforms and 17% support more than 10. These additional linkages can lead to elevated risk, Sullivan warned.
Follow @wm_today

Sullivan told us that every investment manager that Dover spoke to is concerned that sponsors won’t be able to implement their trade instructions accurately. This is complicated by the numerous proprietary communication infrastructures developed by sponsors with many variations existing on multiple dimensions such as different delivery mechanisms (email, fax, web portals) and different messaging formats.

Sponsor Trading Constraints Are a Concern

A big area of concern for managers is trading constraints, Sullivan noted, due to the following issues at sponsor firms: 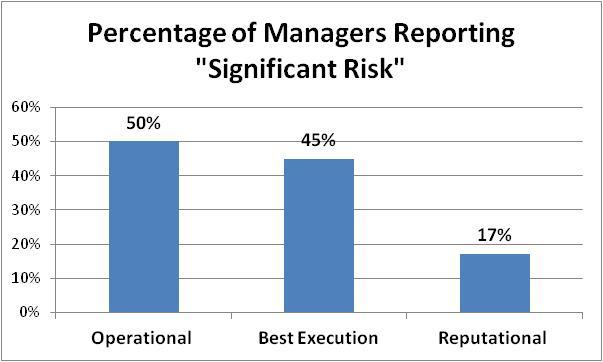 The managers were then asked to rate which of these risks are “significant”. 50% selected operational, 45% said best execution and 17% chose reputational.

Due to the many issues arising from model communication, many managers are starting to build out their own model validation processes to reduce manual error and monitor best execution at the sponsor, according to Sullivan. Also, 67% of managers believe that a centralized model service that provides a standardized method to implement and monitor trade rotation would reduce risk.

The Model Management Exchange (MME) from DTCC is such a centralized model service, Sullivan said. It is secure and redundant communication system with integrated audit trails incorporating validation and confirmation features. It can also facilitate the trade rotation process, but this would require sponsors to send their execution data to DTCC.

The industry should take the opportunity to do something now to address the risks surrounding model delivery, Sullivan urged. I agree that something should be done, but what exactly?

Before anything can be done, both sponsors and managers should agree that they must work together to solve the problems. The risks expressed by managers are due to a complex mix of factors and cannot be easily mitigated and especially not in isolation.

A centralized model hub, such as the DTCC’s Model Management Exchange (MME) or Fiserv’s Model Information Exchange (MIX), which is planned for 2012 release, could help, but only if they achieve critical mass and then they can only help on the communications side. Risks that are due to specific sponsor’s model policies (i.e. Inability to implement price limits, trading windows) or manager operational issues (manual errors) will still exist no matter how the model information is delivered.