Going Under the Hood of Models-Only Programs

This is a summary of a session from the Money Management Institute’s Fall Solutions Conference that was held in October 2013 in New York City.

Are some asset classes better suited for use in models-only programs?

Asset classes that are more liquid are usually easier to trade in a model, Lasker observed.  Communication is important here since some assets can become illiquid for short periods of time and the managers need to know when there are problems implementing model changes, he stated.

While some strategies are more challenging, most obstacles can be overcome so that they can be included in a model, Overway commented.  Fixed income is a good example, since the models are often provided in the from of a list of characteristics instead of individual securities.  This entails more communication between the Natixis overlay management group and the model manager about which securities would be acceptable in the model portfolio, he pointed out.

Are UMA models easier or harder to manage than SMA’s?

According to Camarata, models are harder for a number of reasons, such as the lack of standards for communication.  This forces managers to take on more manual work to deliver model updates and receive information back from sponsors.  This is especially difficult when dealing with static and dynamic models.  If the sponsor runs a static-only system, but the manager wants to provide a dynamic model, there will be a disconnect.  However, Neuberger Bermann has developed a custom process that provides them with the “feeling” of dynamic even when the receiver is static, she claimed.

It’s important that sponsors provide performance data back to the managers.  This is an important way to measure if their models are being implemented correctly.

UMA models provide additional flexibility that isn’t available in SMA’s, Overway proposed.  In the case of liquidity-constrained strategies, such as small caps, MPA allows the underlying managers to assume control of the execution of block orders, while maintaining discretion on the number of share to buy or sell, he noted.

How do you handle differences between SMA and model performance?

At Fred Alger, they closely monitor the performance of their SMA strategies versus how they are implemented as model portfolios, DiGangi reported.  Since their model assets are non-discretionary, there is always the risk of dispersion.  But in their experience, this is usually caused by limits placed on model updates by the sponsors, he said.

For example, on a $1 million portfolio with $100,000 sleeves, a sponsor might only implement model changes that are larger than 50 bps, DiGangi continued.   While this causes dispersion between the performance of the model and Fred Alger’s internally-managed strategies, it is not unexpected because it is written into their contract.  This constant risk of dispersion is one reason why they do not market their model performance, he noted. 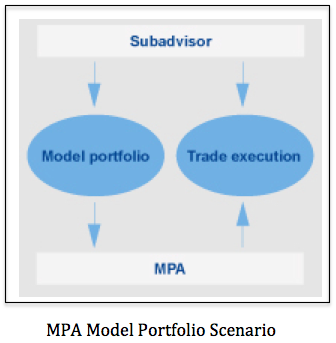 As a model receiver, Managed Portfolio Advisors (MPA) tracks the performance of each model portfolio from the time that the changes are communicated from the manager, Overvway explained.  If they notice differences between the manager’s composite and the composite of accounts implemented by MPA, they will dig into the process to locate the underlying cause, such as trade rotation or problems with communication of the model.  It is important to have sleeve data in order to identify the source of the dispersion, he said.

The sponsor will get questioned if UMA performance differs significantly from the manager’s own, since there is an expectation of due diligence and ongoing monitoring, Camarata stated.  In their experience, differences in the way the back office processes things such as re-orgs or ADR’s can have an impact on performance.

Trading practices can also have a strong effect on performance.  Camarata related a story of one Neuberger client that had full discretion in both their SMA and UMA portfolios, but performance started to diverge for some reason.  It turned out that the SMA accounts had more trading activity than the multi-sleeve UMA’s and this resulted in the accounts having different performance, she concluded.

What is your approach to managing fixed income models?


Camarata described how Neuberger Bermann takes a more macro approach on taxable fixed income.  Their fixed income models aren’t defined at the security level, but instead are setup in different traunches by percentage; corporates, treasuries, mortgages, etc.  In corporates, they maintain a hierarchy of names that they would like to own.  More information is required for these portfolios, such as the required duration and percentage allocation for the different buckets, she said.

Overway pointed out that there are strategies that are highly-customized at the account level and can’t support a model-based approach.  Passive overlay sleeves are required to managed these strategies, where MPA doesn’t have discretion.  A lot of UMA programs handle fixed income in this way, especially with municipal bonds, where discretion is delegated to the underlying manager, he asserted.

A Model-Based Approach to Constructing Corporate Bond Portfolios, The Journal of Fixed Income,  Fall 2012, Vol. 22, No. 2

How does your firm receive models?

MPA is flexible on model communications and doesn’t require managers to submit their models in any specific format, Overway mentioned.  Some managers provide only tickers and percentage weights while others include additional information such as position holds.  However, this relaxed environment doesn’t mean that they don’t manage the process carefully.  New managers have their model communication flow closely monitored for the first few weeks to ensure that the process is running smoothly and that careless errors are avoided, he claimed.  For more on improving manager communication, see Beyond the Style Box: SMAs and Model Portfolios.

Laskar explained that the investment managers at Morgan Stanley review of their models on daily basis.  They enforce a consistent process in order to minimize the time it takes to catch missed trades or better yet, to avoid missing them all together, he said.

IM has ability to make changes at the security level or can upload an entire new allocation with all new weights which would generate trades, static vs dynamic – firms can calculate dynamic models differently

What are some best practices regarding trade rotation?

For UMA accounts, it’s important that trades be done concurrently with the manager’s own accounts, Overway stressed, as long as there is enough liquidity.  MPA provides real-time updates back to the managers throughout the day, he added, although some strategies can’t be traded in real-time and require a one day delay to implement. 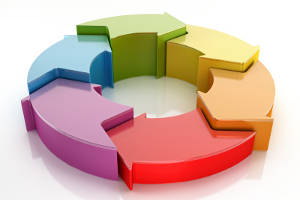 At Fred Alger, they have a different rotation strategy than most firms, according to DiGangi.  They manage all of their SMA’s and UMA’s as one large rotation.  This is possible since the size of their business is not too large and they can usually complete all of their trades done in a single day.  However, if their AUM were to grow significantly in a less liquid asset class, such as small cap,  it would require more time to work the trades, he noted.

Monitoring the rotation is important to ensure that all managers are treated fairly, DiGangi added.  Sponsors should generate rotation analysis reports and analyze them on a quarterly basis to check the trading distribution, he recommended.

Neuberger won’t enter into a relationship with a manager if they don’t support trade rotation, Camarata insisted.  They also try and understand the manager’s process, since sometimes it is their first model relationship, she said.

Their firm-level trade rotation that is managed by the portfolio managers, Camarata continued, with institutional and mutual fund trades going into one bucket and model trades going into a second bucket and alternating daily which one is traded first.  This helps to ensure operational fairness, she emphasized.

What are the implications if the trend towards models-only continues?

According to DiGangi, Fred Alger has been seeing a steady flow of assets out of SMA’s and into models such that they currently have a 70/30 breakdown, whereas a year ago it was closer to 50/50.  There will soon be a problem of how to measure performance without enough SMA assets.  Within the next year, in order to maintain their GIPS compliance, they will have to fund a firm-representative account and place it into their trade rotation for almost every strategy, he predicted.

At one point, Neuberger considered creating a funded accounts and putting it into their rotation, but never followed through on it, Camarata stated.  They do maintain a ‘model account’, but the performance is skewed positive since it doesn’t use real money and is always considered to go first in the rotation, she observed.