Is WealthTrace the Right Financial Planning Software for You?

“If we command our wealth, we shall be rich and free; if our wealth commands us, we are poor indeed.”
— Edmund Burke

The market for financial planning software has exploded over the past five years with new entrants bringing innovative approaches for managing client’s wealth and planning their retirement.  As part of my series on financial planning software, I reviewed WealthTrace, which is a relatively new player looking to find a niche in between existing products. (See Which Financial Planning Software is Right For You?)

The firm was launched three years ago by CEO Doug Carey, a Chartered Financial Analyst (CFA), former portfolio manager and financial software developer, after he became frustrated by how difficult financial planning software was to use.

They offer two versions of their product; one for advisors and another for individual consumers.   Currently, they have over 300 paid users of the consumer version, with the advisor version supporting around 300 trial users and 50 or so paying clients, Carey reported.

What is your company’s approach to financial planning?

At WealthTrace, one of their goals is to make it as simple as possible for the user to see the results of changes to the plan, Carey responded.  And those results should be front and center on the screen and easy to access.  Also, they believe clients have other goals besides running out of money and their system should help to address these goals, he said.

How does your software stack up against the competition 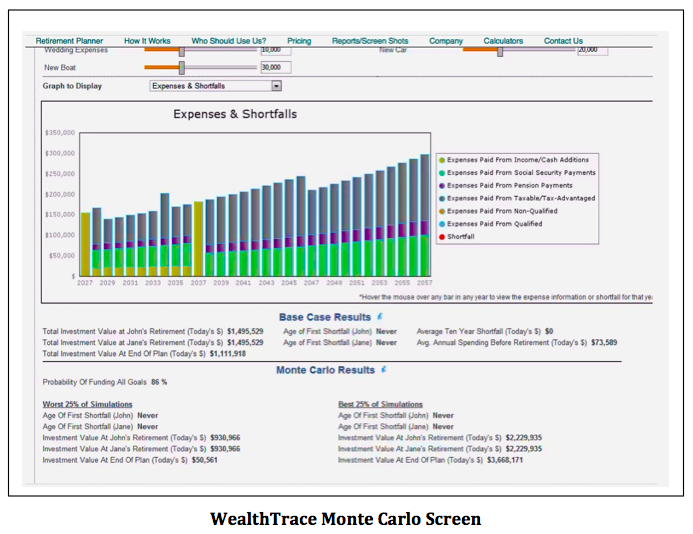 WealthTrace is positioning their product to be somewhere in between MoneyGuide Pro and MoneyTree in terms of features and functionality, Carey stated.  He admits that MoneyGuide Pro has more functionality, but feels that it is cumbersome to use.   While MoneyTree has some features they lack such as estate planning, he insists that WealthTrace is easier to use and has much stronger analytical tools.

Running a Monte Carlo Simulation and calculating a probability of success is a standard feature for financial planning tools.  While WealthTrace has this feature (see screenshot) it does not have the ability to continuously monitor clients’ probability of success and alert the advisor in case it falls below a preset threshold.  This feature is offered by competitors, such as inStream. 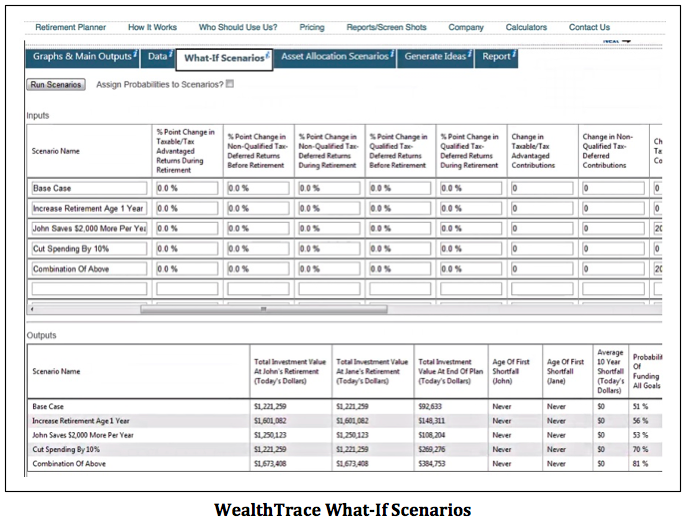 A robust What If Scenario Manager is a critical tool for developing a financial plan that maximizes a client’s probability of achieving their goals by adjusting one or more parameters and assumptions.  WealthTrace allows the user to create multiple scenarios simultaneously and displays the change in probability for each as well as the change if implementing all of them together.

While it can be somewhat cumbersome to try and adjust the many parameters randomly in order to improve a client’s projected outcome, WealthTrace also offers a simple Solver tool that takes a single target goal value as input and calculates the change in a parameter that would be needed to meet the goal. 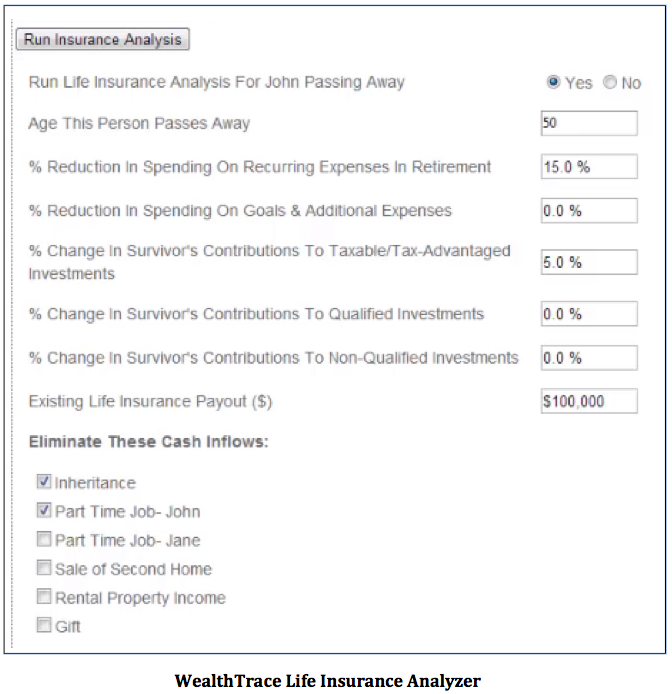 One option that is missing is disability insurance, similar to what is offered by MoneyGuide Pro.

Social Security optimization is a powerful feature that MoneyGuide Pro has, but WealthTrace does n0t.  While they do provide a manual option, it is not as easy to use as a tool that calculates the optimal retirement age for every client.  This type of functionality is on their radar, but due to the complexity of the rules it is “a little bit frightening to be making that kind of prediction,” Carey said.

How important is ease of use in your software design?

WealthTrace was designed with ease of use in mind, according to Carey.  Advisors can run their analytics and see all the results on the same screen, so they don’t have to open a report to get answers, he noted.

Back when he was an advisor, Carey used MoneyGuide Pro.  He said that he had to maneuver through a lot of steps and then generate a report in order to see the results of changes to a client’s plan, which was frustrating and time-consuming.  He decided to design WealthTrace so it would quickly display answers on screen.

“Web-based, interactive and with an intuitive interface, the WealthTrace Retirement Planner presents results in a visual, easy to understand way for both advisors and their clients. Don’t dig for answers when you address simple or complex cases as answers are presented on the screen and in customizable reports.” — Doug Carey, CEO, WealthTrace

When it comes to goals-based planning, which started to displace asset-based planning around a decade ago, WealthTrace provides a straightforward solution.  A user can earmark investments to fund specific goals, but this connection is based only on the person’s age, not the goal itself, Carey explained.  He claimed that the end result is the same, and it a trade-off that avoids overwhelming the user with too many options. This and other simpler options enables an advisor to complete an average financial plan in 30-45 minutes, he stated. 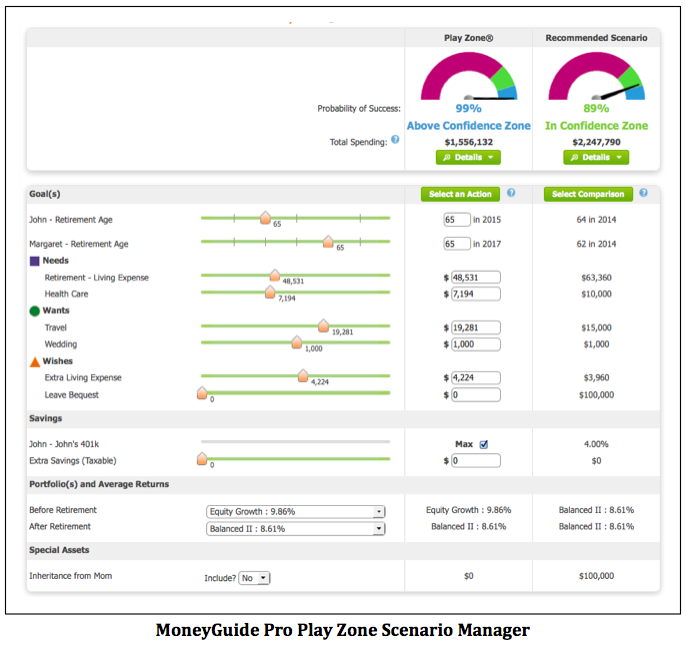 In designing WealthTrace, they avoided the “book” analogy that requires uses to move through pages, Carey stated.  They wanted to make it easy for a user to jump back and forth between sections, make a change and jump back to see the results without losing their place, he emphasized.

While the designers of WealthTrace focused on ease of use, I don’t believe they did enough in terms of creating a rich user interface design.  People have come to expect a Web 2.0 experience for almost all software with an eye-pleasing color palette for backgrounds and controls, as well as crisp graphics in place of text.  This is noticeably lacking in the current WealthTrace version.

Comparing the WealthTrace UI to one of the market leaders, MoneyGuide Pro, it is quite apparent which interface is more user-friendly (see screenshot).  Where WealthTrace is crammed with text entry boxes, MoneyGuide Pro uses sliders and gauges to display their results.  This could be an impediment to users switching from their existing product.

Who are your target clients?

Carey explained that their target client segment is small Registered Investment Advisors (RIAs) with 1-5 advisors on staff.  They would also like to sell into the broker-dealer segment, although this is more difficult since they would need to be approved by the home office.  He also said that they are in the process of being approved by LPL to be offered on their platform.

What is the underlying technology that drives your system?

They use mainly Microsoft software and languages such as ASP and C# with a SQL Server database, Carey described.  Although there is some Javascript as well as HTML5 on the client side.  To ensure security of client information, all data going to or from their servers is encrypted.  Their user validation is handled by Verisign and they don’t store any password or credit card information on their site, he assured me.

What is one way that your product can help make advisors more efficient? 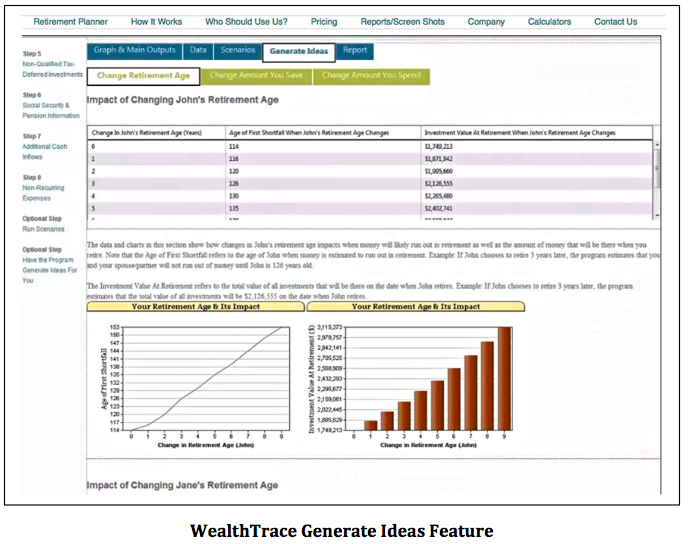 WealthTrace can improve the efficiency of advisors by reducing the amount of manual data entry required in order to create a plan, according to Carey, since other systems can require an hour or more.  Reports can also be trimmed down to just five pages, which makes it easier to present to mass affluent clients, he said.

Another options that can help advisors is the Generate Ideas function.  It analyzes a client’s plan and displays the impact of a series of changes to one of the input parameters.  These include retirement age, contribution amounts, spending, or large expense items.  It runs through hundreds of scenarios and displays the results in both a table and in a graph, Carey noted.

What third party applications do you integrate with?

What are some of the features in your 2014 pipeline?

Some of the features planned for delivery in 2014 include improving the overall product performance and expanding their integration with additional third party applications, Carey reported.  They are also working on a feature to re-allocate a client’s assets to a model portfolio, which is currently a big gap in their functionality.

For example, an advisor can import a client’s portfolio from Schwab PortfolioCenter into WealthTrace and then assign it to a model.  The system will then re-allocate the assets to match those in the model.  It is far from a perfect solution since it assumes a frictionless environment, with no trading costs or tax implications.  However, some static assumptions can be added manually, Carey pointed out.

Other features planned for 2014 are an asset allocation optimizer and a mobile app, Carey mentioned.

WealthTrace is a relatively new entrant into the financial planning software space, but they have developed a product that provides just about everything an advisor would need to provide financial planning services to a wide range of clients.  It is targeted at small RIA’s whose clients are mainly in the mass affluent segment.  While there are a few gaps in their feature set and their interface is not as flashy and eye-catching as some of their competitors, any advisor working at a smaller RIA shop should take a look at WealthTrace to see if it works for them.

The annual fee for the advisor version of WealthTrace is $895, with discounts offered when multiple licenses are purchased.