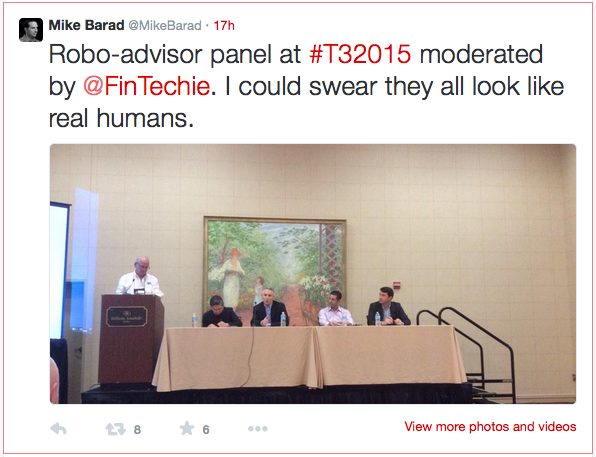 Here’s a lightning fast overview of Day 2 of the Technology Tools for Today (T3) Conference – Advisor Edition from Dallas based on selected Twitter posts (with the #T32015 hashtag) as a guide.

I’ll be diving into more detail on a bunch of these sessions in the near future.  But I wanted to get this out to you today, so anyone who couldn’t make it to Dallas could get a taste of what they missed.

The very first general session was by Neesha Hathi, Senior VP of Advisor Services Technology Solutions.  She gave a mostly Schwab-free presentation about various trends and statistics gleaned from the firm’s many research projects and why advisors should be interested in them.

16% of advisors are in contact w/ clients' children. 40% see money moving to next generation as opportunity. #T32015

This stat has a couple of meanings. 1) Why do so few advisors bother interacting with the next generation of investors?  Especially ones that are part of their clients’ family?  What better way to try and lay the groundwork for the future!

2) Why do 2.5 times as many advisors see the opportunity of inter-generational wealth transfer, but don’t bother getting off their butts to take any action?  They might as well stick a big sign on their backs that says, “Hey Robo-Advisors! Kick Me!”

This statement got a laugh from the audience.  Hathi was referring to how online shopping for advisors is becoming commonplace.  Much like match.com helps people find a spouse, future “dating” services will facilitate connecting investors with potential advisors that match their criteria.

This seems like common sense to me, especially at T3, but I guess someone had to say it.

I have never heard Walters speak before, but now I know I missed some legendary presentations.  He is incredibly entertaining, funny and has incredible insight on the direction of the industry.  And not just related to financial planning software.

He said this. Word for word. Right out of the gate he had the audience eating out of the palm of his hand. No marketing speak.  It felt as though we were at the bar after the conference with a beer in our hands, listening to Walters give us an insiders perspective on everything going on at eMoney.  Very cool.

He said this, too.  When he says “B to C’s” he means the robo-advisors (Business to Consumer).  Right before this, he muttered something like, “I’m going to get in trouble for saying this, but…”

It was a difficult position for Curtis to have to follow Walter’s session, but he soldiered on and delivered a solid performance.  he didn’t have an awesome video like Walters, but he did bring some cartoons and free chicken…

The time between technology release cycles seems to be decreasing at an increasing rate:

It's only been 3 years since G3, but @MoneyGuidePro is already working on next major G4 iteration. -Curtis #T32015

Klein is positioning his firm as a gateway into the advisory process.  Use Riskalyze to provide a baseline risk score for prospects to tell them how bad their current portfolio is and for clients to show them how good their new one is.  Then allow Riskalyze to create the asset allocation and portfolio construction.  That’s a big chunk of the investment management process.

Klein: @Riskalyze gives #advisors a great way to answer question “Why is the market beating my #portfolio?” #t32015 http://t.co/GG7vZFiBJY

Satchkov gave an insightful analysis of the technology underlying robo-advisors and how the algorithms were originally developed many years ago by hedge funds.  These algorithms are now easily copied by any firm with enough computing power. He pointed out that the brains behind Betterment are all Ph.D’s in economics, psychology and finance. He compared this to the Wealthfront management team that is mostly VC’s and techies.

Satchkov: #Wealthfront isn’t worth 25 bps since technology is so cheap #advisors can give it away for free #t32015 http://t.co/yTQfGxUfqO

Presentation on how Morningstar technology can turn you into “The Responsive Advisor”.  Did you know that most advisors and investors prefer Apple devices over Android?  The most popular financial iPad apps are for taxes and mobile banking.

This was one of the most anticipated panels of the day.  Considering that the term “robo-advisor” was mentioned in almost every other sessions and by almost every other speaker, it’s not surprising.  Executives from Upside, Jemstep, Betterment and Wealth Access.

Mike Barad got off one of the funniest tweets of the conference:

Robo-advisor panel at #T32015 moderated by @FinTechie. I could swear they all look like real humans. pic.twitter.com/kM3oQQnag6

A brain dump from RIA technology expert Bill Winterberg, this session probably had the highest return on investment per minute than any other.

Newsletters are not just for clients, create a segment for prospects to nudge them into leads @BillWinterberg #T32015

Overall, an incredibly productive day!  Everyone I have spoken to here has had nothing but positive feedback on the conference.

I’ll be diving into more detail on a bunch of these sessions in the near future.  But I wanted to get this out to you today, so anyone who couldn’t make it to Dallas could get a taste of what they missed.

PrevOne Platform To Rule Them All: How Consolidation Transforms Wealth Management Systems
Should RIAs Use Tactical ETF Managers?Next