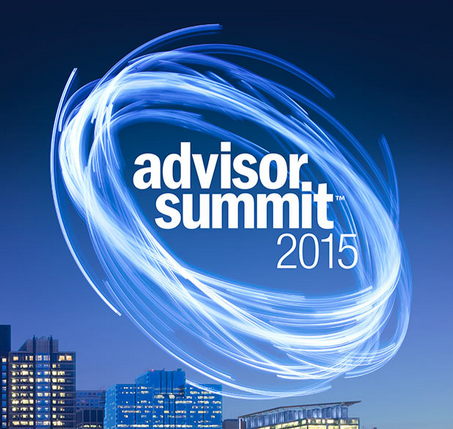 I’m here is sunny Chicago, enjoying the unusually nice weather, deep dish pizza and Goose Island beer, while attending the Envestnet Advisor Summit 2015.  This is a quick overview of some of the key information presented during the first day of conference.

Follow us on Twitter to get live updates from the next two days of speakers, sessions and panels.  Keynote speaker on Friday will be Mike Krzyzewski, men’s basketball coach, Duke University, who recently won his 5th NCAA championship.

Currently, the data exchange with all financial planning tools and ENV2 requires manual interaction. Namely, file imports or clicking individual clients to move their information between applications.  In their upcoming release in August, Envestnet plans to reduce the number of clicks required for advisors to connect data between eMoney and ENV2. (See FinPlan Shootout: eMoney Advisor versus MoneyGuidePro)

They are also working to provide what Bart called on-demand client account importing from ENV2 to MGP.

The third financial planning software that Bart mentioned was Finance Logix.  I noted that the level of connectivity seemed minimal when compared to the other two, much larger players in the space.  But after yesterday’s announcement that Envestnet is acquiring Finance Logix in a deal worth around $32 million, I would expect much tighter integration to be delivered in the next 12-18 months. (See Which Financial Planning Software is Right For You?)

Envestnet built a very useful mobile app for this event.  Having attended many conferences and tried a lot of conference apps, this one was definitely the best design and functionality I have seen.  The online polling worked very well and they used it to gather some statistics from the attendees.

Welcome Address from the CEO

Jud Bergman, Envestnet’s Chairman and CEO used his presentation to gave us a history lesson on an entrepreneur named James Hill, who built a railroad network from St. Paul, Minnesota to Seattle, Washington in the late 1800’s.  Hill only had a ninth grade education, yet built an empire that spanned half the country and was worth over $60 million (around $1.7 billion in 2014 dollars).

Bergman also related the tremendous benefits that a transcontinental railroad provided to the US economy since it allows raw materials to be delivered to industries and for finished goods to then be delivered to consumers.

Envestnet’s research has shown that advisors can provide 300 bps of added value to client portfolio performance.  This can be accomplished if the advisor delivers services such as financial planning, asset selection and allocation, investment selection, rebalancing and tax management (the biggest contributor at 100 bps).

Another reason why Envestnet bought Upside Advisors. (See Why Demographic Differences Define How Advisors Should Talk to Clients)

Jud Bergman at #ENVSummit to advisors: Envestnet will help you 'bridge the digital divide'

Technology is one of the most attractive sectors in valuation terms -HeidiRichardson @BlackRock #ENVSummit pic.twitter.com/gYOXOvrIi7

Right in the middle of the presentation by Dr. Brian Green (below), I received an email from Envestnet’s PR firm that they had acquired the financial planning vendor, Finance Logix.  If you have a minute, check out this well-written analysis of the deal by Michael Kitces.

The Drive to Innovate: Stories from the Frontiers of Discovery

"If you're willing to press into the unknown & let math guide you, you come to spectacular conclusions." #ENVSummit pic.twitter.com/UhBgPmFKq6

Einstein thought, "ask the questions a 5 year old would ask". @bgreene at #ENVSummit

#ENVSummit Fantastic vision but can they really pull it off? Integrating platforms and making it work is TOUGH. pic.twitter.com/EmsE7jVMpN

Ryan Neal, a reporter for WealthManagement.com, for some reason, decided to pick a Twitter fight about advisor technology with Michael Kitces, publisher of the blog Nerd’s Eye View and one of the industry’s leading experts on financial planning and advisor technology.  Not a great idea.  Without reproducing the entire conversation, let’s just say that Kitces schooled him.

DePina asks, "does anyone in this room NOT want this functionality?" #ENVSummit pic.twitter.com/g2iGDD9ARg

Everyone seemed to like the pictures I chose to go along with my tweets.

@ryanWneal Vanguard NOT a robo-advisor. They're human advice platform, happen to meet w/ clients virtually. Like many other RIAs. #ENVSummit

Ron Fiske mentioned that a suggestion was made after last year’s summit to include more technology partners.  So Envestnet built a technology pavilion area just to showcase them.

I didn’t get a limo ride to dinner, but it looks like some clients were getting the royal treatment.