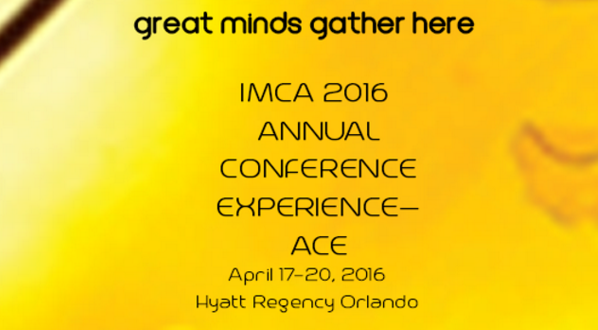 The IMCA 2016 Conference claims to be the largest association gatherings of investment advisors and wealth managers in the industry.  This year’s event included engaging speakers such as Michael Kitces, April Rudin and Frank Coates.  Some of the session topics included optimal rebalancing strategies, understanding Millennials and improving client relationships.

Here are 10 great ideas to take away from IMCA 2016, based on the best tweets sent during the conference.

There are a myriad of resources available to help investors understand their investments’ TCO.  LaValle make an excellent point, assuming that most investors never look beyond an ETF’s management fee when comparing investments.  They should consider the following four contributors to an ETF’s real cost:

Seidner of @PIMCO says he checks the Chinese currency before bed every night. It didn't matter a year a go, but it does now. #IMCA16 #China

In January, when the Chinese stock market was slumping, US markets would fall in unison.  It’s an indicator of the strength of interconnections of global markets that is maintaining these correlations.

Many economists believe that China will devalue their currency again soon, the most recent occurrence was also from January and caused a drop in US market values.  The US is already running a $350 billion trade deficit with China.  Domestic industries could be hurt if imported Chinese goods are reduced in price even further.

I have admired Jack Ma and the global powerhouse he has built in Alibaba Group.  While he is a self-made billionaire via his firm’s $25 billion IPO, he has always remained humble.  He is one of the few CEO’s who is not only liked by his employees, but universally respected and admired.

I love this quote of his from Time magazine:

“We don’t have a rich father or a powerful uncle,” said Ma, who started Alibaba out of his apartment in Hangzhou, China. “We only have the customers that support us.”

This is brilliant.  Many cases of hacking involve social engineering via company employees, rather than computer to computer work.   A firm called KnowBe4, has designed training programs to train staff in how to avoid typical hacker tricks such as phishing emails or impersonating other employees via phone.  This training could significantly cut down on the ability of hackers to penetrate company security measures via the ‘soft underbelly’, the company’s own employees.

Knowbe4 appears to have hired Mitnick to help teach their classes.  Leveraging his notoriety as an former criminal hacker to give the training more legitimacy.

Presenting this today at #IMCA16 A huge opportunity for advisors if they understand how #millennials act and why https://t.co/0YNeSTLUoq

According to Rudin’s online presentation (built using a tool called Prezi) many Millennials are delaying marriage and home ownership to enjoy their single years.  They are not very interested in retirement savings, either (unsurprisingly).

Advisor that want to tap into this client segment must first understand that the communication patterns and preferences of Millennials are different from most other demographics. Realizing these differences and adjusting the way you interface with these prospective clients can be the difference between a signed proposal and radio silence.

The results of Kitces’ research must have raised a lot of eyebrows in the audience since it is the opposite of conventional wisdom.   Annual rebalancing, which has been the mantra of financial advisors for decades, apparently reduces performance when compared to simple buy and hold strategy.  And the more often you rebalance, the worse the performance is!

I’d like to see someone do some validation of this analysis.  Kitces only used data from the most recent bull and bear markets. I’m curious if the same results would be found when checking time periods that include the 2000 tech bubble or 80’s bull market.

Nina Mazar is a professor of Behavioral Economics and says things like “Social norms fuel dishonesty – we can rationalize it or use it as a response to unfairness that creates a balance.”  Her research focuses on our propensity to cheat and why we do it.

She also provided the scary statistic that”3% of the world’s GDP is spent annually on bribes.”  Hardly a comforting thought.

Her work isn’t all negative.  She has partnered with other researchers to find new ways to increase pension participation rates, increase the percentage of people who pay their taxes and make the experience of looking for a new job more pleasurable.

Sal Tiano: We're going to see more fee compression and more regulation for #advisors in the next five years. #IMCA16

In a recent article I wrote with Rich Dion from Envestnet, we found that over 62% of broker/dealers expect fee compression to be their greatest challenge in the coming three-to-five year period.  In the face of this challenge to increase revenue and expand operating margins, an advisory firm must:

Traditionally, firms have needed to expand staff in order to handle more business and/or offer additional services to grow revenue. However, in today’s environment, firms can scale their businesses’ profitably and expand revenue by taking advantage of outsourcing options and technology solutions. The new market environment requires firms to both increase scalability and expand revenue in order to thrive. We believe that firms that can accomplish these two goals will be well-positioned to cushion the impact of fee compression.  (See How Advisors Can Use Technology and Service to Fight Fee Compression)

Carlos Gutierrez: From a budget deficit standpoint, the US economy is back to where it was during World War II. #IMCA16

This is a frightening thought when you consider that our country once liberated the world from oppression and is now spending an equal amount of money with much poorer results.

Gutierrez: flying from Shanghai back to JFK feels like going from The Jetsons to The Flintstones. Leapfrog investing. #IMCA16

Ouch!  Is it really that bad?  Well, at least you can breath outside in NYC.  Shanghai and Beijing lead the world in dangerous air quality.  Remember Mark Zuckerberg’s ‘Smog Jog’ in Beijing back in March?

Visit Vestmark @IMCA to learn how we are helping Wilshire with a new wealth management platform #IMCA16 https://t.co/gzMz85a2vx

The Wilshire TAMP business is a nice pickup for Vestmark.  They seem to be the only wealth management platform vendor who is signing new clients this year.  Now they just have to deliver!

The response from the IMCA 2016 conference was overall very positive.  A good mix of speakers that provided a positive return on the investment in money and especially in time to attend the conference.  And isn’t that what it’s all about?