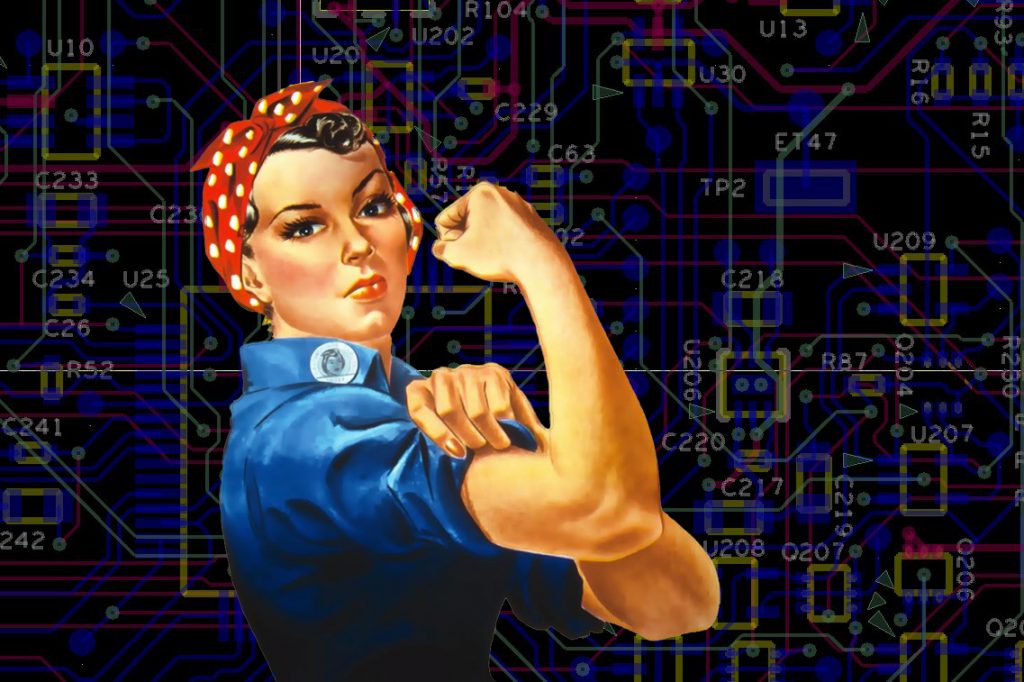 There is a curious trend an observant mind will notice while scanning the halls of any wealth management conference. In most rooms, less than 15 percent of the crowd are women. Despite ongoing efforts, bringing larger numbers of women into the financial advisory fields has been challenging.

FinTech has been no exception. Despite the sector’s power to disrupt the industry and equalize access, women’s presence at the intersection of wealth advice and technology has been lacking. As an example, there is only one female CEO among the top 50 EU FinTech companies.  Gender diversity numbers at other high-profile technology companies follow the trend: 30% women to 70% men at Google, Apple and Twitter.  Even FinTech industry-sponsored events need to improve their female participation ratios. Tina Powell, the Founder of SheCapital and a judge at Fuse 2016, shared that among 90 people at Fuse 2016 only three were women.

The ultimate solution to the puzzle will take time and reach beyond the efforts of any one conference or non-profit. To go deeper in search of answers, we connected with three successful women who have made their mark in the field. Here is their wisdom, lessons learned and advice.

Tap into Your Passion and Address the Service Gap

The importance of  creating a product or service that addresses an unmet need was mentioned by each of the women we spoke to.

The gap might look familiar, as in the case of Ramona Ortega, one of the panelists at the Robos 2.0 session during the In|Vest 2016 conference. Ortega is the founder of My Money My Future, a personal financial platform set to launch in late September. The target of the new offering is the historically under-served Latino and African American population. The platform aims to educate the audience. Ortega’s goal is to give users simple checklists they can use to make important financial decisions. By combining education and action steps, she hopes to empower people to better manage their money.

Under-served populations can sometimes look like companies. Take Sharon Liebowitz, CEO of Meritam Investment Advisors and another panelist at In|Vest 2016. Liebowitz tapped into her desire to help nonprofits get affordable access to high quality investment solutions. As a result, the Meritam platform is custom-built to serve the boards and finance committees of nonprofit organizations. Through serving this niche market, Liebowitz is giving her clients tools to deliver humanitarian aid around the world.

Advocates for increased female participation within the industry can make a considerable difference to those just starting out. Liebowitz remarked on the many opportunities that were created by her early supporters. “It has been great to see to see the number of people on boards who have been really supportive,” she noted.

Support from established industry players had been key for Powell as she started the women-focused robo-advisor SheCapital. Powell’s situation was unique in that she did not have to leave her firm, Beacon Wealth Management, to launch her startup. A self-described “intrepreneur”, Powell was able to work on her idea from within an established organization. This enabled her to take the risks that she might have avoided if she were on her own.

In order to maximize chances for success, support networks must go beyond industry heavy-hitters. Community-building can be an effective way to create a following for an idea. Sallie Krawcheck’s Ellevest, a digital investment platform for women, just closed a round of funding with an additional $9M. That brings her total VC funding to $19M. While some of the big names behind the funding have included Morningstar and tennis star Venus Williams, Krawcheck’s women-only Ellevate Network creates a broader community of potential early adopters.

It will be interesting to see if Ellevest can succeed with a robo-advisor offering where established players like Personal Capital and Wealthfront have stalled. Vanguard and Charles Schwab have absorbed most of the assets since they launched their digital advice solutions last year. While Krawcheck is well-known in the industry, she does not have the name recognition with end investors that will be necessary to stand out from the crowd.

Technology has made launching a new venture easier. Nimble startups with a highly targeted value proposition and a niche can ramp up quickly, observed Liebowitz. While some barriers to entry into the robo playing field may be low, the path is in no way easy.

Take SheCapital, for example. Powell shared that the amount of work it took to bring her idea to a tangible form was staggering, even from within an established firm. There is no practice management playbook for startup robo-advisors.  Every founder has to stumble through the maze of financing, regulations, compliance, filing requirements and other logistics. She describes the process as “being on a robo-coaster.”

With the robo-coaster analogy, it is easy to understand why some founders opt for getting off the ride. Powell made the difficult decision to close SheCapital a year after it launched. How do you know when it is time to push through the inevitable growing pains and when it is best to call it quits? Powell’s advice is to take the emotion out of the decision and look at the hard data. Sometimes, a great concept has vulnerabilities or requires infrastructure beyond what is practical. The ability to make an informed decision that is not driven by ego and emotional attachment is critical.

All three women we spoke with mentioned the importance of taking a risk and starting early. That includes overcoming the fear of trying something new and investing in yourself. By managing finances early and taking advantage of available tools from 401k plans to automated investing platforms, women can create a safety net from which they can afford to take a risk. Ortega also spoke about the importance of understanding and managing credit, which is highly relevant for the minorities served by per platform.

Women in FinTech: Change is Underway

Research and industry efforts have underscored the progress towards welcoming more women into FinTech. The change may be slow and quiet, yet individual firms are beginning to move the needle. From formal initiatives to common-sense solutions, women are encouraged to get into the field. Liebowitz described the industry as bubbling with innovation and opportunity and a great place to build a career. When more women become vocal about their presence and impact others will become present to the possibilities, observed Tina Powell as she shared her experience of live-Tweeting through Fuse 2016. While there has never been a women CEO to take a startup to a billion-dollar IPO, many are leading the way.