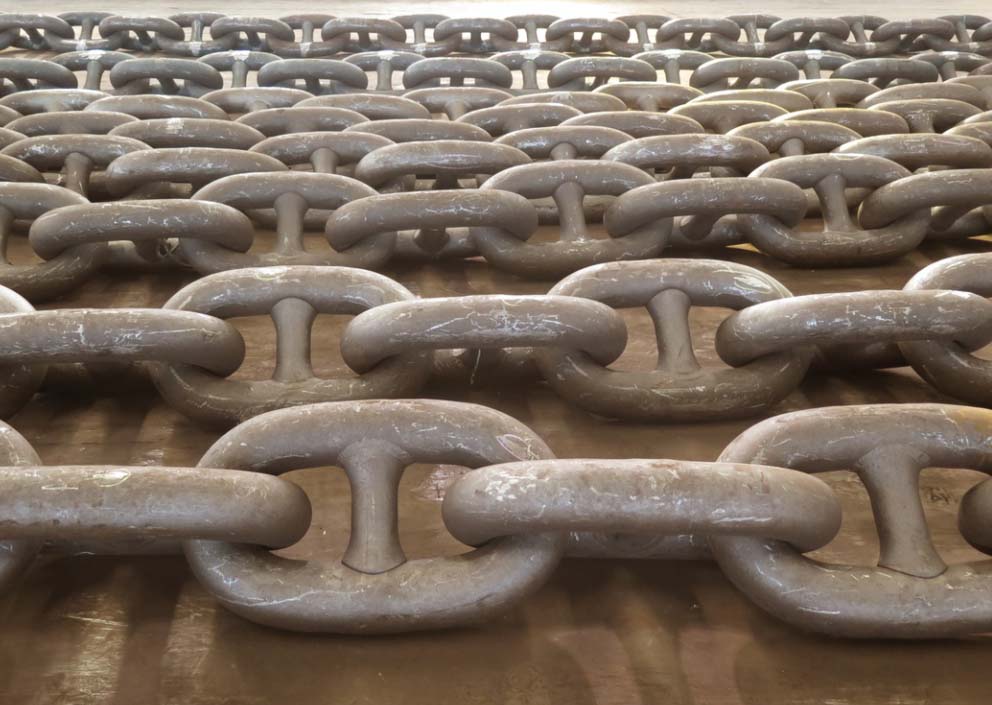 Nearly three years ago, Internet pioneer and Silicon Valley uber-investor Marc Andreessen wrote an article in the New York Times about how the technology behind Bitcoin, the digital currency, is in a state similar to the World Wide Web in the 1990’s. He predicted that a company using Bitcoin technology, would soon lead a wave of disruption across the financial services landscape.

Given his technology chops and history of success investing in Internet startups, one would expect that there would be a blockchain-led revolution in some area by now.

But this has yet to happen.

May 22, 2017 will mark the seven year anniversary of the very first transaction where Bitcoins were exchanged for physical goods. A programmer in Florida paid 10,000 Bitcoins for two Papa Johns’ pizzas worth $30.  At the time, Bitcoins had no value, so getting anyone to give you anything for them was an accomplishment. Using the current exchange rate, those pizza would be worth $5.7 million now.  Probably the world’s most expensive meal!

Last year the number of merchants who accept the crypto-currency as valid payment passed 100,000.  Yet the key technology underlying its success, the blockchain distributed ledger, has not had any significant impact in other areas.

According to a recent report from investment bank Morgan Stanley:

The [blockchain] transition will likely be gradual. Expect blockchain applications to appear one asset class at a time, in an iterative process that may take as long as a decade. When change comes, it will likely come from industry consortia—not startups.

What is holding blockchain back?  Where is the massive industry disruption we saw from other Andreessen investments such as GroupOn, Twitter and Facebook (to name just a few)?

The Morgan Stanley report included 10 challenges that are standing in the way of blockchain: 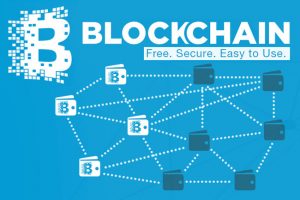 The WEF acknowledged in its report that collaboration between competing financial institutions is key if blockchain is to overcome its early challenges.  To try and overcome this hurdle, a consortium of nine banks joined together, back in September 2015, and launched a group called R3 CEV to promote industry standards and encourage blockchain adoption.

The stated goals of the group are to collaborate on research, design, and engineering to help advance “state-of-the-art enterprise-scale shared ledger solutions,” in order to meet banking requirements for security, reliability, performance, scalability, and auditing.

The consortium had over 70 companies at one point, but a little more than a year later, some partners are bailing out. Goldman Sachs, one of the first nine members, Banco Santander SA and Morgan Stanley all recently declined to renew their membership.

Goldman Sachs might have decided to go it alone. They have filed for two blockchain patents, one for foreign exchange trading and the other for its own digital currency.

Goldman (along with Santander) is also an investor in a rival blockchain consortium called Digital Asset Holdings (DAH).  DAH has developed software that uses distributed ledgers to settle financial trades. Their stated goal is to create a “cross-industry open standard.”  This is critical since too many choices will delay adoption.

This can be broken into two broad categories; data security and cybersecurity.  In a speech given by Christopher Woolard, the FCA’s Director of Strategy and Competition, he pointed out a number of questions that must be answered before blockchain will be trusted to handle financial services transactions.  How users access the network and who will control assigning access in a distributed network?  What data security can users expect?  What is the level of transparency required to verify transactions while not jeopardizing the confidentiality of the parties involved?

The levels of encryption as well as network security at different nodes can vary widely, so if any single node is breached, it could endanger the security of the entire network.  Since there is an absence of network standards, users can run their own back-office systems and other technology with their blockchain implementations.  The network will only be as strong as its weakest link.

Despite the fact that changes to data occur via the network of nodes rather than a central authority, there are still concerns as to the level of cyber-security within blockchain networks. Although data in a blockchain is encrypted, the levels of encryption vary, so if that can be breached, the data is no longer secure. This is particularly the case given the absence of common network standards and protocols with users presently having their own mix of back-office systems and technology stacks. The Bafin paper echoed these concerns, flagging the need to protect systems from cyber-attacks and the importance of data protection in transactions.

Probably the largest challenge is the 800 pound elephant in the room. Many banks generate tremendous revenue from facilitating financial transactions by providing resources to handle much of the manual effort required for reconciliation. If blockchain makes transactions instantaneous and practically free, why would anyone pay a bank to be the middleman?  Anthony Watson, CEO of Uphold, thinks banks current interest in blockchain is “cynical.” Banks actually want to exert control over blockchain, rather than drive any meaningful reforms, claimed Watson, whose company is trying to leverage blockchain technology to offer free international money transfers.

Putting their motives aside for the moment, it is still unknown if there will be sufficient return on investment after building the blockchain infrastructure to justify the expense.  A mechanism for sharing costs across the many participating institutions needs to be developed and implemented.

Initial costs will be high and increased volume will drive this down, but it will still be a chicken and egg dilemma. The network will only be valuable when a critical mass of institutions have made a commitment to support distributed ledgers.  Many firms will be taking a wait and see approach since incentives will vary up and down the financial services food chain. 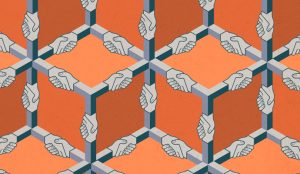 Blockchain has the potential to become the “beating heart” of the global financial system, proclaimed a report from the World Economic Forum (WEF) published in August.

The distributed blockchain ledger is currently too slow to accommodate the scale of financial transactions.  Multiple blockchain nodes are required to validate every transaction, which can take up to seven seconds, according to Roger Oliphant, chief architect of ACI Worldwide.  The process needs to be 1,000 faster before it can be adopted by global banking institutions.

Governance in business is centered around establishment of policies and their continuous monitoring to ensure they are correctly implemented and there is proper accountability.  Mike Gault, founder and CEO of blockchain technology platform Guardtime, believes that the biggest problem is bureaucracy:

… institutionally, banks are not wired to drive this kind of innovation. Quite simply: bureaucracy. Lawyers, compliance, front office, back office, middle office — enacting meaningful reform, or even getting budget to expand a technology program, could require sign-off from all of them. This is necessary in the high-stakes financial world, but undoubtedly a barrier to innovation. If blockchain programs ever leave the incubators, they’ll have to justify themselves up and down the line.

Considering how many of the top global banks have been hit with scandals or blowback from the 2008 financial crisis in the form of massive fines, it would be understandable if there were an aversion towards anything that might upset the status quo. Many of the critical systems that underpin the world’s financial infrastructure are 15 or 20 years old or more.  Replacing them or even overhauling them is a monumental task that not many banks may have the appetite to take on.

No governments have yet issued any blockchain regulations, but both the US and EU are closely monitoring developments.  European Parliament’s Committee on Economic and Monetary Affairs released a draft report that called for regulation to deal with potential risks, including:

Banks and other financial institutions that are testing blockchain should be aware that the above areas will most likely be part of any regulatory framework.

Some of other areas that Andreessen believes could be impacted by blockchain technology include:

Rob Galaski, a partner at ‘big four’ accounting firm Deloitte, said the transformative potential of blockchain is beyond doubt, but also stressed that it shouldn’t be seen as a “blanket cure for inefficiency in financial services”.

Blockchain Is Not Ready for Prime Time

Unfortunately, there is no consensus on when blockchain is going to be ready for prime time,  The WEF thinks blockchain has the potential to “profoundly alter” the way banks conduct their business worldwide, partly by reducing operating costs and making financial services more secure and accessible.  However, based on Gartner‘s Technology Hype Cycle, blockchain is at the peak of its inflated expectations, but they estimate another 5 to 10 years are required before it reaches mainstream adoption levels.

The past seven years have been a wild ride as Bitcoin has moved from buying a few pizzas to possibly revolutionizing the world’s financial infrastructure.  My gut feeling is that we don’t know what we don’t know about what blockchain technology firms are working on.  It’s possible some will appear with ideas we never expected that could help blockchain make generational leaps ahead in terms of innovation and launch a driver for adoption across wide swaths of the industry.

I’m betting on a shorter timeframe than Gartner is proposing.  I see blockchain hitting its stride in financial services within the next five years.  Time will tell if I’m right or if blockchain needs a bit more time to percolate before it is ready to take the worl by storm.