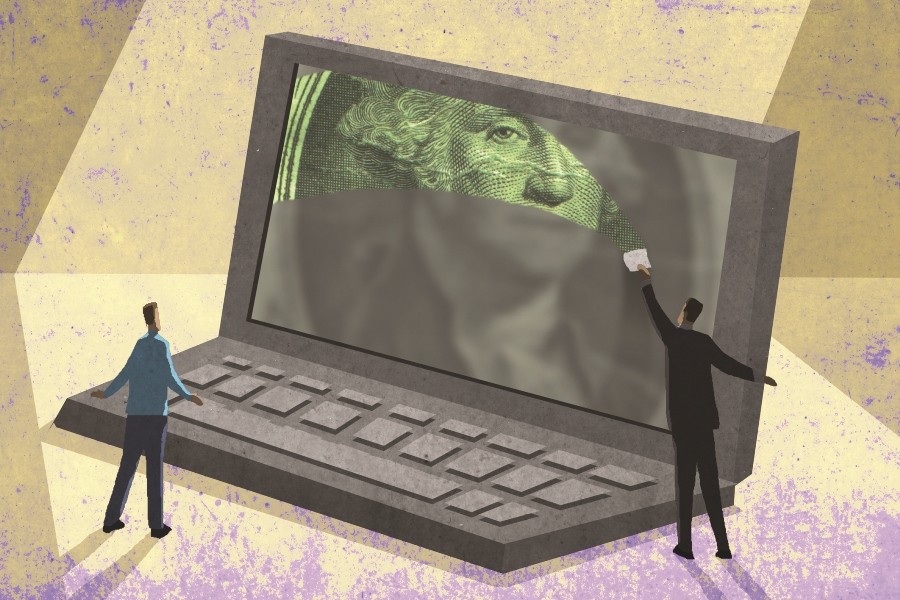 This is the first post in a new series I’m launching here on Wealth Management Today called, “Winners of WealthTech.”  It is more of a straight interview format with influential leaders in wealth management technology.

I was inspired to start this by one of my mentors, Tim Ferriss, successful investor, entrepreneur, author and podcaster.  Actually, he doesn’t know that he’s one of my mentors, since we’ve never met.  But his work has been a big influence on me, so I’m going to keep saying it until he tells me to stop.

I highly recommend Tim’s latest book, Tools of Titans, which you can find online or in a brick and mortar book store.

This format is a bit of a change from our usual analysis, product reviews or industry trends.  The questions are more personal in nature because we’re trying to discover the habits that have helped to make these leaders successful.

Our first interview is with Bill Crager (@ENVCrager), co-founder and president of Envestnet, a leading provider of integrated portfolio, practice management, and reporting solutions to financial advisors and institutions.  Bill was named a 2015 Pioneer by the Money Management Institute is also the co-author of The Essential Advisor: Building Value in the Investor-Advisor Relationship.

What has become more important to you over the past few years?

“Talent has become more important.  The hunt for talent is part of the competitive battlefield that we need to think strategically about.  We’ve come to a place where we don’t look at traditional pedigrees.  What you need to drive innovation at Envestnet is the ability to take on a little bit of risk.”

“When we started Envestnet, I posted a quote from [Ernest] Hemingway’s Noble Prize Acceptance Speech on the side of my desk.”

For a true writer each book should be a new beginning where he tries again for something that is beyond attainment. He should always try for something that has never been done or that others have tried and failed. Then sometimes, with great luck, he will succeed.

“Resumes are not the right choice most of the time.  [We look for people who can be] unconventional, with a focus on creativity and the potential for disruption.”

CI: I’ve always hated resumes.  While it wasn’t the primary reason I started my own consulting firm, never having to send a resume was certainly a major benefit.  It is difficult to identify unique thinkers and creative minds.  I’m always looking for new questions to ask that can tease out this information in the shortest amount of time.

How do you identify someone with a “potential for disruption”?

“You push them into places they aren’t prepared to go.  I ask their opinion on Uber a lot because it’s disruptive.  What it means to demographics, traffic, the automotive industry, passengers. Do they think Ford is threatened by Uber?”

“I’ve developed an instinct for it.  I didn’t recognize it in myself when I started, but I recognize it now people in every conversation I have.  If I’m talking to a managing director or the head of a business unit at a large firm, I sense a completely different sensibility than I do when I’m talking to a 32-yr-old MBA that wants to leave a mark.”

“This is a fun part and I’m spending a lot more time here.”

What’s become more important to you as an individual?

“Time.  You start a business that goes from two guys and a card table to 3,000+ employees. We have entered a new realm of what time means.  How I manage time, how I think about the allocation of time, where I permit time, you get a lot more careful about it.”

“What I’ve de-emphasized is short-term thinking. After 17 years of this I’ve realized that we are a responsive company, we’re going to jump on any issue that comes along. [But] you [shouldn’t] overreact or be more thoughtful about it [than needed].”

“[I’m thinking] less about day-to-day bumps and more about what’s our purpose, the big picture.”

CI: In my consulting practice, I speak to a lot of CxO’s who get caught up in the weeds when they should be focusing on strategy.  It’s common to find out that they only spend 5% of their time on big picture issues, yet they admit it’s where they provide the most value to the firm.  Time to flip the pyramid on its head!

How do you stay motivated?

“You only get so many at bats, or whatever your sports analogy is.  Somewhere along the line, it was early that I realized this opportunity was special.  I try to preach it.  People who weren’t at the card table 17 years ago, don’t recognize it the way Jud [Bergman] and I did.  Any young person that joins the firm, we tell them that they are helping to make a difference for investors to help manage their wealth.”

‘[It’s about] opportunity and passion.  I love the company.  I go through a personal exercise, [thinking] if I didn’t have it, [it would be] a strange feeling to me.  This drives me.”

What is something you believe that other people might think is crazy?

“I believe in corporate culture and that the company can impact the individual in a way that is important to them.  The job, their paycheck, their colleagues.  We’re building a new office outside Philadelphia, which will eventually house 500 employees.  People that come into our environment begin to change.”

“Somebody’s wife sent me a hand-written thank you note. It said, ‘My husband changed.  He wakes up in the morning, he wants to go to work, and you guys have changed him.'”

What is your morning routine?

“I get up at 5:00 am. I don’t sleep a lot. Two days a week I do a yoga routine, two days I’m with a trainer, and two days I’ll run.  Every morning I have the same thing for breakfast.  A smoothie that I call, “The Fountain of Youth.” It has banana, apple, carrots, blueberries, strawberries, flax seed, chia seeds, Chaga (mushroom) powder, protein powder, probiotic yogurt, spinach and avocado.  I’m usually at work by 7:30 am.”

CI: I make a smoothie with many of the same ingredients, but I use it as a post-workout recovery drink. It usually comes out thick and green, which grosses out my wife.  But I don’t let that stop me.

What do you think of when you hear the word “successful”?

“I think about leaving a mark.  Having a lasting impact on something.  I’m not motivated by success.  I was an English major.  I do not have a finance background.  I’m clever, fairly creative and innovative and have a partner and some great people.  If financial success is your driver, there are uncertain habits.”

“If you’re motivated by wanting to leave a mark, people can sense that and they will follow you and you will make an impact.  Envestnet is something that I have had the privilege of doing.  I’m proud of it.  People who work with me are proud of it.  My family is proud of it.  We sacrificed a lot.”

“But at the end of the day, I think my kids have learned a lot from it.  They are all around college age now, but none of them are pursuing a finance track.”

What bad advice do you hear being given out most often?

“Stay with your job.  I talk to a lot of college kids.  Get a job.  It doesn’t lead to a path of impact.  This age is all about possibility.  It’s a risk and threat every minute.  I’ll tell a room full of college kids, ‘don’t take the job that seems to be the right choice.’  [Like at a] big bank or insurance or accounting company.  Start your own company or join a startup or find a company that’s doing innovative things.”

“I was an English major and I wanted to write a book.  I tried and failed.  When I graduated college, everyone was going to work on Wall Street and making big bucks.  But I decided I was going to wait tables, hang out in bookstores and write a novel.”

“I never finished it.  I got close, but I didn’t have the courage to stick with it.  I got a job.  It’s a regret, but what it taught me was how to start something when staring at a blank page.  In the early days of Envestnet, the thing that differentiated me from everyone else was that I had stared at that blank page and know that at the end of the day you’d better put words on it.”

CI: As the father of three daughters, two of which have or will have art-related degrees, I wish every company president had this attitude!

What book have you gifted most often?

“The Seventh Sense by Joshua Cooper Ramo.  It’s about how networks are recreating political, economic and social infrastructure, networks are fundamentally game-changing.”

“My dad died when he was 50 in Geneva, Switzerland. He was an electrical engineer and worked for ITT.  He had patents related to packet switching for fax transmission.  He predicted that paper would no longer be necessary for communications, which was a crazy idea at the time.”

“This book inspired my passion to look into more of my father’s work.”

How do you keep the entrepreneurial spirit going?

“It’s a challenge.  The Yodlee incubator fired us up.  We hatch ideas.  We have an emerging innovation organization.  We need to create a speed lane or EZ-Pass for great ideas.  We have an internal funding mechanism that identifies ideas that we believe can be revolutionary.”

Who was your biggest influence on you when you were growing up?

“My father traveled a lot when I was growing up. So, my grandfather on my mother’s side became a father figure.  I included a photo of him in my ‘Pioneer’ speech a few years ago.  He was the youngest son of a big Italian family and his father was a tailor.  He got himself into college, got a law degree, married a girl from the neighborhood in Brooklyn, and was always impeccably dressed. He believed in manners and that words mattered.”

“He eventually became a judge and he was tough. But he told me what I needed to do.  There was no forgiveness.  Tuck your shirt in, tie your shoe, cut your hair.  When he got a little older, he was such a dear guy, we were emotionally connected, especially after my dad died.”

What message would you send to your younger self?

“Don’t quit that book.  The idea that I had to give up because everyone was off ahead of me and I felt terrible.  I had four children under the age of four when I started the company.  I really got caught up in the suits people were wearing and dinners they were having.  Instead, I worked at a bookstore and wrote.  But I wish I hadn’t given up.”

Thanks for reading this first in our series of articles on Winner of WealthTech.  Please leave a comment below if you liked it or even if you didn’t like it.